I'm an unapologetically Suburban Homebody Vegan: In bed each night by nine, and out the door for work each morning by eight. Still, I can't help but sometimes marvel at how awesome it would be to be Derek Goodwin. Enjoy this conversation with a True Renaissance Vegan who's as likely to be photographing Farm Sanctuary animals as he is to be photographing vegan weddings, and as likely to be finding inspiration at Burning Man as he is to be teaching at an upcoming retreat in Costa Rica.

New Vegan Age: Please tell us how you came to veganism. Was there any foreshadowing of it in your childhood?

Derek Goodwin: I grew up in Syracuse, NY. My maternal grandfather and uncle were dairy farmers in Kansas, and we would go visit once every year or so. On one of these visits I was big enough to feed the calves, who were kept in spacious (by today's standards) stalls. This was done with a quart sized baby bottle filled with synthetic milk. I bonded with an all black calf who I named Blacky, and spent lots of time with him.

A year or so later, I was looking through my photo album and saw a picture of Blacky, and asked my mom how he was. She then informed me honestly that he was probably auctioned to become a veal calf. Twenty years later, in 1994, I started to wean myself off of red meat, to eat healthier by the conventional wisdom of the time. By 1996 I was fully vegan, having learned of the atrocities of industrial farming in John Robbin’s Diet for a New America. Looking back, I see now that it was the trauma of learning Blacky’s fate that was the true catalyst. The mind and heart work in mysterious ways!

NVA: You have a unique background and varied interests—more so than most of us. What usually leads you in a new direction, both geographically and professionally? Is it more of an internal compass that you obey, or have there been friends and mentors who inspired you to follow them into new endeavors?

DG: I am someone with a lot of creative energy. While my main passions are photography, yoga and music, I find that any form of self-expression is fun to explore, and I love to work with my hands. I believe that the best way to be an advocate for animals or any other cause, is to use the talents the universe has given you. I don’t want to be an angry vegan, I want to be one who attracts curiosity by the way I am in the world, and invite people who resonate with what I am doing to explore other ways of living. The vegan diet, and its underlying ethics, are easier to spread when people see they are gaining beauty and community in their life rather than losing a comfort.

NVA: One of your many fun and unusual endeavors is The Vegan Bus. Tell us more about it. How and when did it come into being? What did it accomplish? What is its current status?

DG: The Vegan Bus evolved out of the experience I had at the 2006 Burning Man Festival. It was a mind-expanding time in my life, where the psychedelic and unbounded self-expression of the festival inspired me to want to bring the vegan message there. I formed a band of friends in Western MA, and we fund-raised enough to buy a used school bus and converted it to run on used vegetable oil. We drove it across country to Burning Man in 2007, barely making it intact but having fun and attracting a lot of attention.

NVA: You're a certified Jivamukti yoga teacher. How does your veganism inform your yoga practice, and vice versa?

DG: I was attracted to Jivamukti Yoga because the founders, Sharon Gannon and David Life, promote the animal rights message by connecting it to the philosophy of yoga. The most-referenced yogic text in the west is the Yoga Sutras of Patanjali, a 2,000 year-old book of aphorisms that I view as a non-denominational handbook for living in tune with the universe. The path that Patanjali lays out for reaching higher consciousness and contentment starts with what are called the yamas. Yama is Sanskrit for ‘restraint’ and there are 5 of them; non-harming, truthfulness, not stealing, not misusing sexual energy, and not being greedy. This is how Patanjali teaches us that we should act in the world towards others, if we want to cultivate happiness in our own lives. 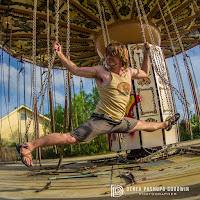 The Sanskrit world for non-violence is ahimsa, and it is the first yama. The goal is to practice ahimsa in thought, word, and action. Thought is of the most importance, as all actions arise from thought. The very first step of the path is non-violence, and even the second yama (satya, truthfulness) can be broken to support that practice, if truthfulness will cause harm. So non-harming is the foundation, and the physical practice of asana (seat, or pose) that yoga has become identified with in the west is reliant upon that foundation. Some yogis can do amazing things with their bodies, but the connection to the universe is really through cultivating a real love of all beings. That is the most important teaching.

NVA: We actually learned about you through your photography—through your work with the major New York farm sanctuaries and the vegan events you've done. Tell us what led you to photography, where in the world it has taken you, and whether you plan to continue with it. (We hope so!)

DG: I started taking pictures as a kid with a 110mm today camera. If you are under 40 you may have to Google that! I fell in love with the process. I actually failed my photography class in high school, because I was focused on the high more than the school. Eventually I pursued photography at the Rochester Institute of Technology and graduated with honors.

I started my photo business in 2000 focused on weddings, but through an early connection with Joseph Connelly (VegNews founding editor) I was able to place an ad in VegNews, back when it was a B&W magazine on news print! Mostly I got angry vegans telling me film was not vegan, but Samantha Ragsdale from Farm Sanctuary reached out to me to photograph their first Gala fundraiser in NYC. From that relationship I began the journey of photographing farm animals in sanctuaries, that has brought me some small notoriety in the vegan world. I like to look back to that first photo I took of Blacky as the beginning of my Farm Animal photography journey!

NVA: How do potential clients usually learn about your yoga instruction? Web searches? Word of mouth? Both? Other ways? How about your photography work?

DG: Currently I teach at yoga studios, most prominently the Jivamukti Yoga School in Union Square, NYC. I also work with animal sanctuaries and vegan organizations to teach classes and retreats. I have taught at Farm Sanctuary, Woodstock Farm Animal Sanctuary, and the Catskill Animal Sanctuary. I have a newsletter that your readers can use to keep in touch.

NVA: Would you recommend converting interests into income for young vegans—people in high school and college who are just starting to navigate an uncertain job market? What are the main pros and cons of piecing together a freelance career based on one's varied interests?

DG: Pros are doing what one loves, and the freedom in scheduling your life. Con is the need to always be looking for the next job. If you put sufficient effort into researching SEO strategies & networking in the physical world and on social media, then you can do it. If you are attached to the security of a 9-5 job, that’s ok too.

NVA: Can you identify a single common thread that ties together your life and work to date? How will it continue? Any new prospects, ideas, or interests you would like to follow up on in the next decade—and beyond?

DG: Creativity is the thread, combined with curiosity and a belief in greater purpose. If I dedicate my work to something other than myself, it keeps me motivated. Currently I am focused on my photography and creating yoga classes, workshops and events. What I have learned is to not overextend myself. I have another podcast in mind, but need to make some space in my life to manifest it. I hope to travel and teach and spread positive messages, and make inspiring images and videos of the things I experience.

NVA: Thank you, Derek! We look forward to following your interests as they continue to evolve, on Instagram, Twitter, and Pinterest.
Posted by Unknown at 7:30 AM

Late last year, I shared how I used 2015 to become a healthier vegan. At the end of the post, I challenged people to use 2016 to become better vegans—and I got busy doing so myself.

Since giving up animal products and foods in 2010, I'd always struggled with shaving: I couldn't find good vegan products that got the job done well. Turns out that I just hadn't done enough research. Fanciful Fox makes a great line of shaving oil, aftershave, and shaving cream—I love the rakish scent—and Harry's makes excellent vegan razors (not tested on animals, and no animal products).

What other vegan shaving products work well? Please leave comments with your recommendations.
Posted by Unknown at 2:13 PM

Taking care of this animal

Though I stopped making regular updates over a year ago, New Vegan Age continues to receive a few thousand visitors a month. With that in mind, I thought it'd be nice to give readers an update. Some years ago, there was an article criticizing vegans who take a great interest in helping animals but almost none in themselves. Well, that criticism started to hit home when I crossed into the low end of the obese BMI range late last year.

I was disgusted with myself, and I was ready to do better. Over the past year, I went from being a "mostly junk food" vegan to a "mostly raw and whole foods" vegan. I didn't get into veganism for the health benefits, but being a healthy vegan is now as permanent for me as going vegetarian was in 1997 and as going vegan was in 2010.

This guy convinced me I could do it. This guy taught me what changes I needed to make. And these guys sum up why it wasn't difficult:


Have you ever caught yourself saying “I’ll try,” when it comes to a fitness goal, or life in general?

You’ve probably heard the phrase “burn the ships.”
If you truly want to succeed, leave yourself no other option. Burn the mediocrity ship to the ground. Don’t allow failure to be an option.
1. Decide on your goal.
2. Learn what you need to do to achieve your goal.
3. Take consistent action knowing that your success is inevitable.


I wish you a happy, safe, and healthy 2016. Make this your year to become a better vegan!