On January 1st, 1953, a 44-year-old New Jersey woman set out—without food, money, or possessions—on a cross-country "walk for peace" that would continue for the rest of her life. Peace Pilgrim could be the most inspiring person you didn't learn about about in school. She's certainly one of the most inspiring vegetarians you'll ever hear about!

I first read the collection of Peace Pilgrim's quotes and writings 20 years ago—I was vegetarian for many years before going vegan in 2010—and it was largely Peace's rationale that inspired me to take these important steps: "I would not kill a creature, and I would not ask someone else to kill it for me, so I will not eat the flesh of the creature."

Two years ago, again inspired by Peace Pilgrim, I undertook a 3-day pilgrimage on foot to raise funds for and awareness about Farm Sanctuary. During the journey, and as I met people along the way, I had plenty of time to reflect on her mission to help bring peace between nations, communities, and individuals, as well as the crucial inner peace that so many of us need. 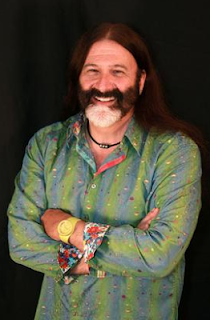 Every Philadelphia music fan knows of Pierre Robert, as he's been interviewing and hanging out with our favorite rock legends for the past thirty or forty years. Many of the greats even count him as a trusted friend and fellow Citizen. (Some of us have had the good fortune to meet Pierre in person; almost 30 years ago, he spent at least an hour talking to a pimply, insecure 13-year-old—read: me—in a Delaware County church basement at teen dance he agreed to DJ.)

As such, Pierre is probably the closest many of us will ever come to actually meeting our rock heroes. He's also a long-time vegetarian who—as you can see in this recent clip unveiling his remodeled VW microbus named "Minerva"—comes from "Planet Asparagus." You can call and chat with Pierre most weekdays when he hosts his popular mid-day program on the legendary Philly radio station, WMMR. 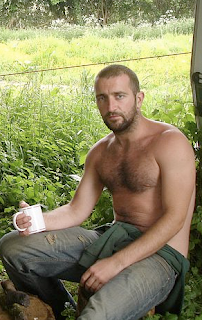 Mark Boyle is an Irish vegan living in southwestern England who's spent long periods of time living without money, and then shared those lessons with us. For Boyle, integrating the avoidance of using animals or their byproducts—with leaving a minimal carbon footprint and living a rich life filled with music, friends, laughter, and love—is not just possible. It's his daily reality.

"People think that my life is about sacrifice, and about giving up things," Boyle says in this video, while casually swinging to a chorus of birds outside. "But actually, I've gained so much more since living without money. I've never been happier, never been fitter, and never been healthier."

Even though most of us don't live in a trailer, forage and barter for our food, stay warm by tossing collected wood into a heater made from spare parts, or bathe in the nearest stream, we can learn a lot about life—all life—and living it more intentionally from this inspiring vegan.
Posted by Unknown at 11:33 AM